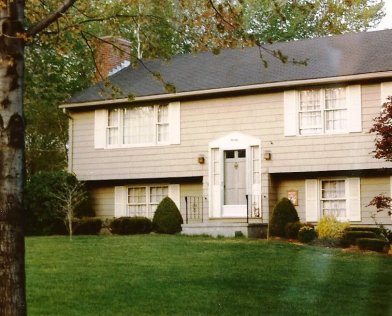 It was two weeks into the water ban. Ken wasn’t concerned about the patrolling police spotting his fresh, green lawn — an oasis among a street of wilting crabgrass in the hot August sun.  Ken’s plan to water late at night while the neighbors slept was working and his annual quest to maintain the thickest, lushest lawn on Tundra Lane was a success.

Ken whistled as he hustled down his driveway, admiring his grass and feeling happy he had worked all those years at the golf course.  He knew the best time to spread fertilizer, weed control and lime each season.  He pulled out the newspaper from its plastic bin and read the front page headline, a nearly two year Deja Vu, Iranian Hostage Crisis.  The black and white photo featured the imprisoned Americans, blindfolded, sweating, and handcuffed.  Their gaunt, weary bodies being shoved by their captors into another bombed out building.

“Poor bastards,” Ken mumbled, shaking his head, adorned with thick brown sideburns.  He pushed the image of the suffering diplomats out of his head, wiped his brow and spotted the caterpillars sliding off the greased, foil wrapped tree.  He got close to the bark of the trunk, flicking away a  caterpillar with his finger.

“Son of a Bitch,” Ken sighed, cursing the summer and the gauntlet of nature running amuck.

He plucked a few stray weeds from his front landscape and returned to his home office, the air conditioner in the window buzzing and churning cool air.

Ken pushed the thoughts of crawling caterpillars, tortured humans and oppressive heat and focused on his work:  one bridge for Naomi Webb, a morning TV personality who wore colorful African garb and interviewed famous people from the neighboring city.  She was Ken’s first celebrity and he was invited by the dentist to personally set her impression to make sure his work fit perfectly and match the tooth color so it blended nicely with her broad smile.  Ken had ten other cases due by the end of the week to various dentists — crowns and bridges, porcelain teeth to replace sections of decaying mouths. 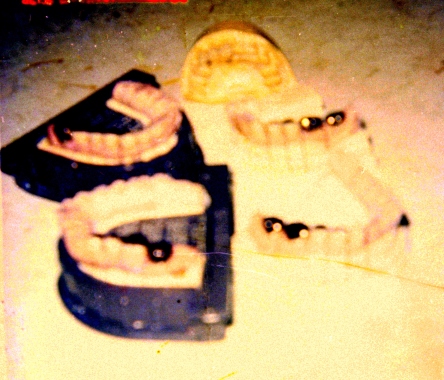 Over the whirring air conditioning and a.m. radio Ken was jarred to attention.  Screaming feedback echoed from across the street.  His teenage neighbor Matt Sunderland had connected his electric guitar to his amplifier. A few loud chords were strummed.  Ken bristled, turning the volume on his radio a little louder, hoping the talk radio would squelch the new racket coming from across the street.  His digital clock read 8 a.m. and he shook his head, “God damn delinquent, needs to get a job,” he mumbled.

Ken’s eleven-year old daughter Mary Beth walked into the office, her backpack slung over her shoulder, red wavy hair pulled into a pony tail ready for swim lessons.  She started to whip her pony tail to the rhythm of the repetitive chords and wailed, “Cat Scratch Fever, wah, wah, waaah!,” and laughed, sticking out her tongue like Gene Simmons.

Mary Beth wrapped her arms around her dad’s shoulders and kissed his cheek.

“Yep,” Mary Beth skipped to the door and opened it to the outside, the guitar sound vibrating against the house.

“Shut that door,” Ken yelled, assaulted by the noise.

“You’d think that guy would learn a different song,” suggested Mary Beth, dutifully shutting the door for her dad.

“He’s doing it on purpose because I complained to his dad,” explained Ken to his daughter who continued to mock the music with her air guitar gyrations.

“His parents should be sick of listening to that,” Mary Beth figured, “or get him some lessons.  Maybe play a little Van Halen or Blondie.  Enough of this Ted Nugent junk.”

Now well into the summer, Mary Beth knew that Matt the neighbor was the enemy, a daily topic of discussion at the dinner table, watching her dad’s face turn red, spit spewing from his mouth as he complained.  But Mary Beth had to admit Matt was kind of cute.  She enjoyed watching him from afar, secret glimpses of Matt walking around his driveway in denim cut offs, shirtless, washing his Nova, flicking his shoulder length hair, and smoking cigarettes with his friends at the end of the driveway.  Inevitably, the butts always ended up on her Dad’s lawn igniting another verbal fit.

“Is your mother bringing you to swimming?”

Mary Beth stopped thinking about Matt and turned to her day of swim lessons, tennis and a stop at the library to report on the books she read that week, two Judy Blume novels, “Sheila the Great” and “Are You There God It’s Me Margaret.”  Mary Beth’s mom had confiscated “Forever” the book her friend Kathy leant to her because it had the “F” word in it and the main character is only fifteen and has sex.

“I can’t stand the crawl stroke. “

Mary Beth opened the door again, the electric noise flooding into the office.

“Don’t let the music get to you Dad, “ Mary Beth yelled, “Before you know it Matt will be back at school!”

For the next hour Matt improvised crazed jumbles of chords and screeches.  There was nothing talented or musical to Ken’s ears and each amplified screech slowly pushed Ken closer and closer to the edge.

“That does it,” Ken rose from his chair and grabbed the phone, circling 911 on the rotary phone.

“This call is being recorded, what is your emergency?” the dispatch answered.

“This is Ken Martinsen on 20 Tundra Lane.  I have called before.  Listen to this racket.”

Ken opened the door and faced the phone to the loud music.

“This noise happens every day, all day.  I work from home, have business calls and I can’t hear over this noise.”

The dispatcher, deadpan and unfazed by the complaint sighed, “You’ve called before sir and the police drove by and saw and heard nothing.”

“That’s because he closes the garage door when he sees the police driving down the street.  I can’t be the only neighbor complaining.”

“Sir, you are the only neighbor complaining.”

“I have no recourse?  I have to put up with this noise pollution?”

Ken swung open the door, bracing against the wailing guitar and marched down the driveway, across the street and stood in front of the one car garage, now converted into Matt’s personal stage where he performed to an unused lawn mower, wheelbarrow, some spare tires and Ken.  Matt nodded at Ken, his lips pressed against a lit cigarette, his chewed fingers mimicking Eddie Van Halen.

Ken’s nose flared and his hands clinched.  He spotted the electric cord attached to the amplifier and yanked it free, halting the loud noise.

“You think this is fun and games don’t you,” Ken started, “You think you won.  Bothering the old man across the way?  I have a business to run and you’re disrupting it.  I have a family to raise and you are bothering us.”

Matt smirked in retort, pulled a drag from his cigarette and tossed the lit cig at Ken’s feet, then exhaled his smoke in Ken’s face.

With that the police pulled into Matt’s driveway, slowly getting out of the patrol car and walking toward the two men.

“What seems to be the problem here,” asked the stocky cop, dwarfed next to his tall, lanky partner.

“Pops here is trespassing and threatening me,” answered Matt.

“I just called the police,” defended Ken, “It’s barely 9 a.m. and this punk has been blasting his guitar for over an hour!”

“Son, would you please refrain from playing.  Perhaps you can practice inside your home.”

“Aren’t you polite.  Such a polite guy,” Ken taunted, rolling his eyes and waving off Matt’s smarmy schmoozing.

“Say, officers, have you noticed how green Mr. Martinsen’s lawn is?  You know, last night, I came home pretty late, and Mr. Martinsen had two sprinklers running.  Isn’t there a water ban in town?”  Matt smiled at Ken.

The officers pulled out tiny note pads and started taking notes.  In unison they turned toward the lawn in question and proceeded to walk toward it, leaving Matt and his guitar alone in his garage.

“Where are you going, “ Ken called out to the officer’s backs, “I am a tax paying business owner.  I shouldn’t get penalized for taking care of my property?!”

The officers began to walk around Ken’s front lawn, finding the hose and connected sprinklers.  One of the cops disconnected the sprinkler and water dripped from the hose.

“It does look like this was recently used sir.  I am afraid we are going to have to give you a ticket.  Violators have to pay a penalty of $250.”

“Son of a bitch …” Ken turned back toward Matt who was waving as he closed his garage door.

“Did you see that beheading footage on the news,” Matt’s assistant Veronica asked as she followed him into his office, “That ISIS is scary.”

Matt brushed off Veronica’s morning chit chat, ran his fingers threw the few remaining hairs on his head and straightened the knot to his yellow tie as he settled into his leather high back chair, “What’s on for today?”

Veronica rattled off his appointments for the day including a meeting with casino representatives to finalize the acquisition of six blocks of Main Street; a stop at city hall to file permits for another commercial property and then a lunch meeting with a bank ready to put leans on several properties not paying their mortgage.

Matt was still reeling from the case he lost earlier in the week. The recording studio he represented was sued for breaking the city’s noise ordinance and lost.

“Can you get Casey on the phone for me?  I want to help him find a new location for the studio,” Matt asked his assistant.

“Will do.  Oh yea, your son’s college called.  Sounds like he’s still not attending class and he’s officially on academic probation,” Veronica stayed seated, chewing on her Orbit gum, waiting for Matt to invite her to exit.

He rocked side to side in his chair, thinking about the faceless ISIS murderers with machetes and his son, diddling around with his 50 grand a year.

“Oh yea, here’s your mail,” Veronica handed Matt his mail, a glossy invitation to his law school reunion, some junk mail and an unusual envelope signed in shaky handwriting to Matty Sunderlund.

Matt opened up the envelope and pulled out a newspaper clipping from two days earlier.  It included a photograph of Matt walking out of court with his client from the recording studio and the headline, “Recording Studio Sued for Breaking City Noise Ordinance”.

On the clipped out article was a yellow Post It note with more shaky hand-writing , “Karma is a bitch Matty.”

One thought on “Cat Scratch Fever”