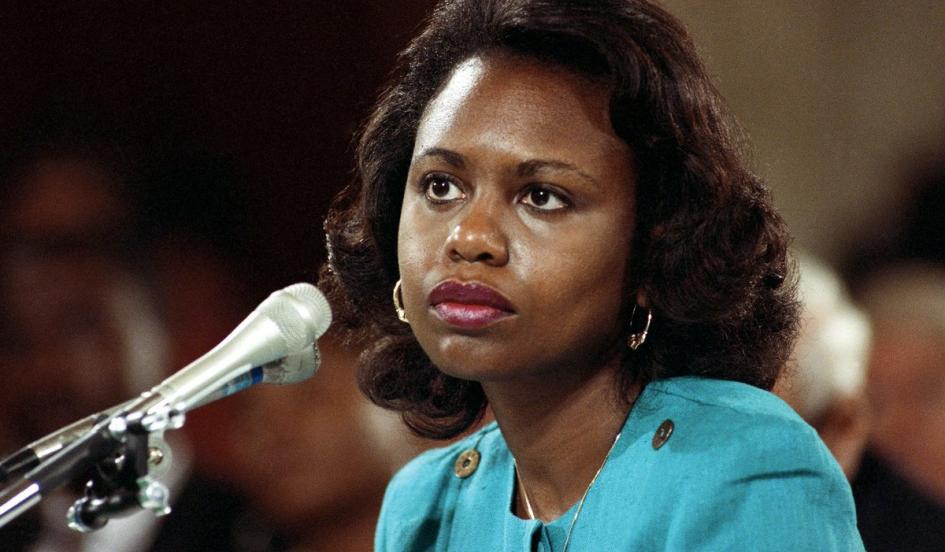 I was a recent college graduate when I watched Anita Hill be publically and figuratively lynched by a panel of old, white men.

Anita was young, eager, accomplished, bright and beautiful.  But she was the proverbial fly in the ointment of Judge Clarence Thomas’ Supreme Court nomination.  Throughout the verbal firing squad of questioning, Anita remained poised, dignified and true to her word.  Today she is nearly sixty years old, a scholar and professor at Brandeis University and an expert and coveted lecturer on gender and women’s issues.

I can’t help but wonder what Anita’s first ambitions were?  What kind of public servant could she have become before her televised character assassination?  After enduring such scrutiny, how much of her passion and ambition was deflated?  Who can blame her for quietly pursuing a career in higher education?  What did America lose from not taking this woman’s claims of inappropriate conduct from Clarence Thomas seriously?  In 1991, long before Sheryl Sandberg’s Lean In book, Anita Hill leaned in and was instantly shoved back.  A real life taming of the shrew aired in our living rooms every night.

Ten years after Anita’s notoriety, I was a thirty-two year old department head with a staff of five in search of a sixth employee.  I had interviewed several candidates and there was one man that looked promising.  When my boss sat down with me to learn who I wanted to present an offer to, I gave him my thoughts.  He agreed with my thinking about this one gentleman I’ll call Lou.

“Lou’s a great guy,” my boss swooned with his syrupy, sing-song condescension. He wore a crisp white shirt with his initials embroidered on the cuff that his wife dutifully pressed the night before, “Suuuuper guy.  Do you think we can get him for, $80,000?”

I stopped in my tracks, “That’s more than I make for my job and I have more responsibility and experience.  Do you plan on giving me a raise that I don’t know about?”

My boss guffawed, “Lou is a father of three.  You make plenty of money for a single woman.”

I had all I could do not to hurtle over his desk and choke him.  My response, “I didn’t tell Lou to get married at 25 and start a baby factory.”

I didn’t hire Lou and I was acutely aware that this boss of mine was going to be a problem.

Eventually I married and somehow having a husband to take to the work Christmas party gave me some credibility or perhaps show the boss that it might be a little harder to be overtly discriminatory towards me because of my nightly pillow talk companion.

When I became pregnant with my son, I waited nearly six months to tell my work I was expecting.  Maybe I could get away with no one noticing and then take a three month vacation with accrued time.  I preferred people thought I was fat rather than pregnant.  But I begrudgingly told my boss and my staff.

As predicted, the speculation began.  Would I return to work and how would my pregnancy impact my productivity?  Post pregnancy, a male colleague revealed to me that our boss was discussing my breast size with other male colleagues around the office.  How big would they get while I was expecting?  I wouldn’t have been surprised if there was an office pool.  Five bucks a guess.  38 D, do we have 40 DD?

This was unsettling news to learn.  How was sexualizing me also undermining me as a good employee and minimizing my reputation with my colleagues and direct reports?  Did my work matter?  Was anyone paying attention to that?  Did it matter that I was surpassing set goals, retaining good employees and improving my department’s reputation?

Months after I had my son and returned to work, I was in another meeting with my boss.  A female colleague came in to leave him some research.  She was a little chubby and wore a peach colored blouse.

“Thanks Lisa, you’re a peach,” he purred.

Lisa turned to leave and looked at me, rolled her eyes and kept on walking.

“How do you think Lisa feels right now?’ I asked pointedly to my boss.

My boss smirked, “What?  I gave her a compliment.”

“No you didn’t.  You just made her feel uncomfortable.”

I kept these verbal incidences to myself, never reporting my discomfort to human resources or my bosses’ boss, the president of the institution. Instead, I’d talk to myself on the way home, gripping the steering wheel, gritting my teeth, emailing my husband the latest inappropriate comment.  What good would it do to complain?  I’d just be one of those angry, man hating women making up lies.

Eventually my boss was fired and not for the inappropriate comments he made to women. Turns out being a jerk was just one of many deficits he had.  After eight years of carrying the weight of his disrespect, I eventually left the organization for a fresh start and a new, improved opportunity.

Sexual harassment is murky waters to swim in.  Seeing Anita Hill on the evening news twenty-five years ago was a warning that this kind of conduct existed, but it was not a good example of how speaking up for yourself can free women of being demoralized at work.

In a 2011 interview Anita Hill said, “What I felt in 1991 was a rejection of myself and my life experience.”  Anita credits the 2009 Democratic Primary election between a woman and an African-American man as ” an acceptance of people who could identify with my life.  This is the symbol of acceptance of me that I lost a part of in 1991.”

Times have changed for the better since 1991, but there is still room for improvement.  Even a woman running for president in 2015 is just another opportunity for a bunch of old men to playfully bat her around to see if she cries “Mercy” or publically and unapologetically devalue her credentials as a candidate and opponent because of her looks.

Why don’t we gather every male government official from Andrew Jackson to John Edwards in a room with all the women they minimized and demeaned to grill them for eleven hours and televise it!  I’d settle in with some popcorn and watch that!

4 thoughts on “Was Anita’s Bravery in Vain?”