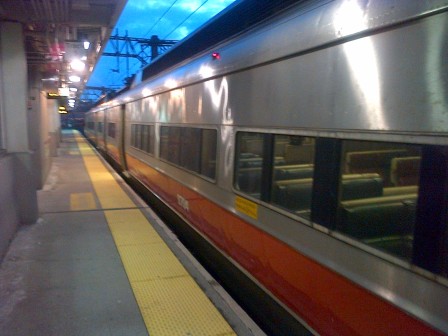 I ride the Metro North train from New Haven to Grand Central Station periodically.  I enjoy studying the commuters shuffling on and off, the swaying vibration of the train as it lumbers along, the views behind old warehouses littered with decade old debris, or the greening marshes framing marinas along Westport.

Sometimes it’s the stereotypical  white, male, business man in a pinstriped suit and trench coat, reading the New York Times, hair perfectly trimmed, spectacles that read he is protestant, married, lives in a stately home and comes home at 8 p.m. from the city, missing his kid’s talent show or his wife’s pork roast.  Or the pair of construction workers, knees shaky, boots worn, talking about which friend’s apartment they’ll flop at later and thrilled that they are going to the drywall gig in Norwalk.

It’s fun to live vicariously for a moment in a different, peculiar life, fitting in my own story-line for my eavesdropping entertainment.

One afternoon returning from New York City, the train picked up a young woman in Bridgeport.  She sat directly in front of me, wearing a purple winter cap, slightly askew on her curly black hair.  She played on her phone and stared at the passing landscape.  When the train arrived in New Haven she got up and exited the train.  As I passed her seat to leave, I saw that she left a small, tapestry wallet behind.  I grabbed it and ran off the train, trying to pick her out from a wall of slow moving bobbing heads.  She was gone.

I opened the wallet to see if there was any identification.  Inside was twenty dollars, a Southern Connecticut State University student I.D. a debit card and her license.  Her name was Alicia and she was from Bridgeport.  I walked to the terminal and asked a Metro North employee if they had a lost and found.

“All lost and found items are sent back to Grand Central.”

I looked at Alicia’s license and the Bridgeport address.  She wasn’t going to New York City anytime soon and she’d never think to go there to claim her lost item.

Immediately, I thought of Alicia, riding back to her dorm in the free shuttle bus that the University provides from Union Station to campus.  She is realizing that she left her wallet.  That sickening drop in her stomach followed by a retracing of her steps has consumed her.  Panicked, she now has to call her bank to cancel the debit card, walk to the student union to get a new student I.D., go to the D.M.V. for a new license and bum some cash from her roommate to tie her over.

Poor Alicia, I thought.  I dialed information to see if I could get her home number in Bridgeport.  No number was listed with the name and address on her license.

Maybe she was visiting an ailing grandparent or friend because she had a morning free from classes.  Maybe she was coming back from a part-time job that was helping her pay for college.

“I’m sorry ma’am, we can’t give you that information,” said the officer answering the phone.

I gave a quick recap – wallet, train, lost – and my offer to deliver the wallet to campus police for them to return to her.

“If I bring the wallet to you, can you give it to her?”

The officer hesitated and then answered, “She’s a student here, and we’ll get her the wallet if you bring it.”

My GPS lead me to the campus, crawling with coeds walking to their next destination.  By now Alicia was among them, grabbing for her missing wallet at the onsite Dunk’n Donuts and realizing she has no money for her iced mocha.

When I arrived at campus police and handed the wallet to the officer on duty he looked up at me, “You brought it,” he said incredulously, “We’ll make sure she gets it.”

As I walked away the officer smiled as if it had been some time since he’d witnessed some decency.

Today there was a retired couple on the train, probably in route to see a Broadway show, some museum hopping and cafe sitting.  A businessman was talking too loud about nothing that couldn’t wait until he got to the office.  The sounds of the train engineer clicking tickets ebbed and flowed throughout the ride.  A group of students with red Fairfield Prep jackets hopped on, laughing and carrying lacrosse sticks from their practice.

Stories and lives commuting throughout life were taking place on this New Haven line.  It was kind of nice to have a brief if forgettable role in a passenger’s life.  I’ll never meet Alicia, but hope she was happy to get her wallet, and enjoyed the wave of relief that filled the pit of her stomach when it was back in her possession.